Hi there, for the first time in this blog, and probably for the last, there’s a note in English here. I know that, there are some crazy people [1] who don’t speak French but who even come here, sometimes with google translate to have a look.

But this time, it is not for that, but just because I have had the crazy chance to interview Lindsey Stirling, I must put it here, in its original version too. Because at least, there was a big work of multi-translation French to English and English to French [2]

I would like to thank Jennifer Fletcher who made that possible ; and now, please sit down and read this interview.

I remember seeing the violin on Sesame Street, and my dad used to take us to free orchestra concerts all the time.  I noticed early-on that the violinists had all the “cool” parts, and so by age six I was literally begging my parents for lessons.

I love Sushi, but generally I prefer a little bit of meat (chicken or beef) to fish.  I am not a vegetarian by any means but I don’t eat a ton of meat either.

I like to snack on things like fruit and nuts and maybe some crackers, but my favorite thing to snack on is cereal.  I’m definitely a cereal addict!

I usually create a backtrack with a producer first, and then spend the next several days brainstorming and experimenting with different melodies.  It’s crazy; sometimes when I’m stumped or get writer’s block, I’ll have a dream about what I’m working on and wake up with a clear idea of the melody I need to write.  So quite literally, I often compose in my sleep.

I made up some simple melodies as a kid, of course, and I recorded an album with the band “Stomp on Melvin” when I was in high school.  But I actually wrote my first violin solo composition for the America’s Junior Miss pageant.

I’m pretty easy going, random, and tend to do things at the last minute, and I work really well under pressure.  I don’t necessarily have a routine, though I usually go through a similar process to get from conceptual beginning to completed track.  Sometimes I think of a story or a concept, and I move forward to create a song based on that “feeling” or idea.  Other times I literally just get together with a producer and start experimenting with different sounds until we come up with something I really like.  Over the next several days I then experiment with my violin.  If I can come up with a melody to put over the track that I absolutely love, it’s a winner!  If nothing is really working for me/coming to me, I put the track aside and start over.

Well I don’t have any cats 😛 but my family especially loves my stuff…at least they say they do (they’d better!) But in all honesty, I love that I can go to my family and they give constructive criticism/feedback; Stirling’s are a pretty honest bunch.  So when they tell me they love something I’ve done, they really mean it.  I couldn’t ask for a more supportive family.  I know they love me and that they’d do just about anything for me if I needed them.

I don’t really have a specific place where I compose, but if you want an idea of what it might have looked like when I used to do pretty much EVERYTHING for my music videos (props, costumes, music, managing, directing, producing), picture a room with the floor covered in cloth, papers, half-packed suitcases, half-finished costumes draped over an un-made bed, several violin cases, and a bowl of half-eaten cereal on the floor.  In other words, “creativity meets tornado.”

I’ve made LOTS of mistakes, and of course it would have made my life easier had I done some things differently, but I wouldn’t want to give back any of the things I’ve learned from those mistakes either.  So I guess the answer is “yes”…I would do things the same if I could go back.  But would I move forward and intentionally make those same mistakes again?  Absolutely not.  Because that’s the whole point of making mistakes: to learn from them.

I’ve been able to live my dream, tour the world, share my music, and meet thousands of amazing people all over this amazing planet!  I feel incredibly blessed and humbled that I have had this incredible opportunity.  The worst part about what I do is probably transitioning from “tour mode” to “home mode.”  Performing live in front of thousands of people every night is what I love doing most, and incredibly high-energy, tons of adrenaline haha; I just love it!  So when that all comes to a sudden halt and I’m living a fairly normal life at home, it can be quite a let-down and I have to make a point of reminding myself of all the things I’m grateful for; the people and family and friends that make “normal” life wonderful in and of itself.

I think that traveling the world has made me more aware of how much people are affected by the culture they live in, in mostly good ways and in maybe some not-so-good ways too.  Just a general observation.

Thank you so much for all of your support; you’ve been amazing fans and I can’t wait to come back to perform in Belgium again!

Yes, my sisters and I all learned instruments growing up. Brooke plays the cello, and my sister Jennifer plays trumpet.  She performs in this group currently: Millennial, but I’ve been unable to attend any of her concerts because they always land in the middle of my tours haha; I’ve heard the group is amazing though. My mom used to love to dance, but currently I’m the only dancer in the family 😛

[1] Hello, FUHA team
[2] So that those who don’t speak French may also have this interview

One Response to “Lindsey Stirling’s interview”

This site uses Akismet to reduce spam. Learn how your comment data is processed. 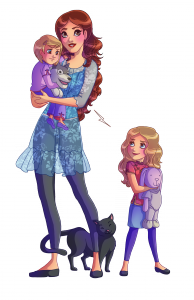